Just taking a break form the ironing to write this post.  I'll tell you what caused the Mother's Day Moment!

So, I was ironing while listening to a talk by Dieter F Uchtdorf ready for our discussion in church tomorrow. You can watch it here!  The talk was given to young adults and reminds them how important they are to God and how by being true to him and to themselves he will guide them through this adventure in mortality.  Suddenly I could hear the piano playing a beautiful tune, well not on its own obviously!  Martha had come downstairs and was practising for a surprise gift for someone.  I was brought to tears by the beauty of her music.

I pondered then as I listened to her and thought about all three of my young adult children.  They amaze me everyday with the way they live their lives, making decisions that those around them would mock them for and making choices that make them stand out from the crowd, that's not easy, but they do it and they do it with grace and love.  I add to my children those that they choose to associate with and those that they have brought and will bring into our family.  Young people who have been prepared to take on the shared responsibility of raising the next generation with the same grace and love.  These young people are full of promise and have a bright future ahead as do all of God's sons and daughters.  If only they could all see it.

As we have all welcomed the first of the next generation into our hearts this year I know that he,  and those siblings and cousins that follow him, will be loved and blessed by great parents who know who they are and why they are here on the earth right now.  They are charged with such a great responsibility to raise children in these times but I know they can do it.  As they continue to remember that they are loved by their Heavenly Father and their Saviour they will be guided in their role.

the role of mother is the best thing in my life, I love to watch them grow and change and love and learn.

Love you all forever xxxx 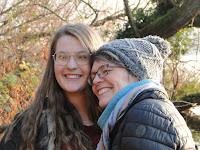 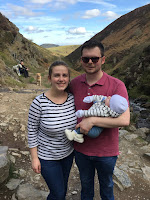 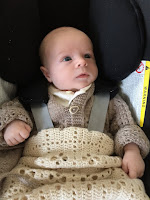 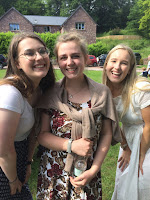 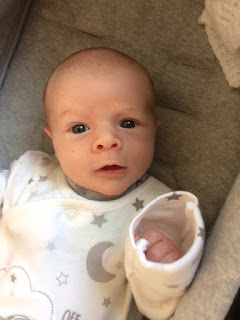 Do you know when you just happen across something that is the answer to what you have been puzzling over?
I am very grateful for this little video, its a talk I've heard before but it was meant for me right now.

I love my family,  I love my Saviour and I love how the way I live my life makes me feel.  I have been preparing a talk for Church this weekend, its about becoming as a little child and accepting Heavenly Father's plan.
A big lesson to me this week has been the reaction of a group of faithful Missionaries in Australia to the passing of one of their fellow Elders.
Their pure testimonies of their love of the Lord and their faith in his plan has strengthened me.  Their absolute faith that they will see their friend again and their outpouring of love for the things he taught them.

Finding Joy everyday in whatever situation we find ourselves in is vital, having hope in His plan can allow us to do this.
Posted by Theresa at 00:24 No comments:

So here I am after another huge gap.  Who knew I still had an audience?!?

So much has happened sine I last wrote but writing is what I feel like i need to do now.  Before I became aware that someone out there still looked for new posts on my blog, I had this feeling that I wanted to write more.

I believe my last blog was when Ross had his mission call.  Well soon after that he fell in love and brought a beautiful young lady into our lives, Harriet, more on her later.

Ross continued on though with his progress towards his mission and left us on July 4th 2017, our silver wedding anniversary. He loves his mission and we hear from him each week, he is not a big writer but we hear enough to know that he is safe and happy, learning and growing.  We have had two of our FaceTime calls, Christmas and Mother's Day, and he looks well.

So seven weeks after he left we welcomed Gareth home from California, in the two weeks preceding his homecoming I spoke with him about the beautiful young lady he met before he left on his mission. (can I just add here that there is a certain pattern to this in our family as Calvin and I met just before his mission too!)  He said they were thinking about meeting up when he got home.  Well to cut a not very long story short they met up in September, October, December and February and got married in April.  Karo is from Iceland so their meetings were spread apart and took place in different countries but they got engaged in Iceland at Christmas and married here in our beautiful chapel in Wales, before being sealed in the London Temple where they had first met back in May 2015.

We spent the time from September to April supporting Gareth at University in Telford and getting to know Harriet and Karo better.  Its been so much fun outnumbering the boys!!

A few short weeks ago we waved goodbye to harriet as she left for her mission to Temple Square in Salt Lake City, she will spend her 18 months giving tours and testifying of Jesus Christ to people from all over the world.

So here we are now, Calvin, Martha and I living in Wales, Gareth and Karo have settled for now in Shrewsbury and we await the return of Ross and Harriet next year. 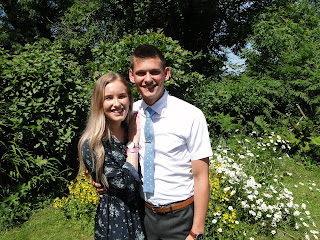 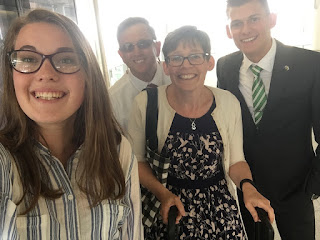 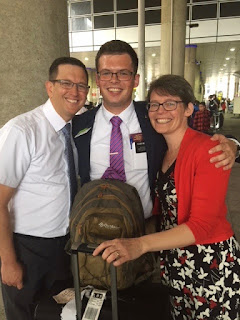 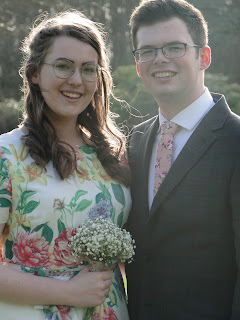 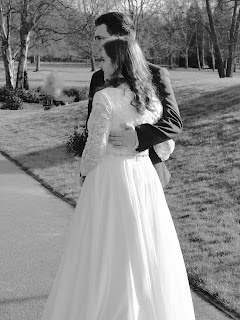 The wedding of Gareth and Karo 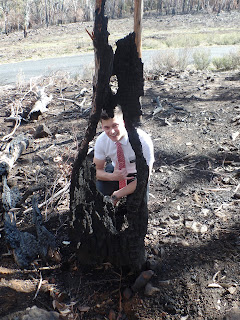 Ross down under in the outback 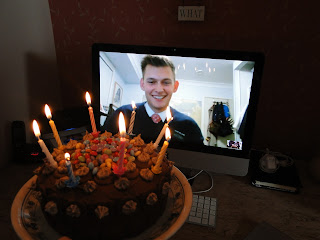 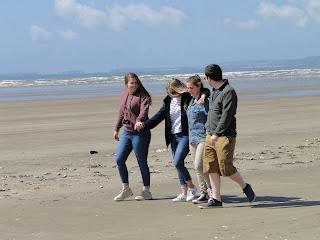 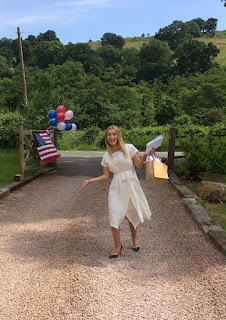 So the last year and a bit has been quite an adventure and the experiences of motherhood just keep on going and changing.  It seems like such a short time ago that they were all small and now we are almost doubled in number!!  I am really looking forward to the experiences to come in the next chapter of our life.

Thanks for being there reader, you know who you are, thanks for always thinking of us and remembering our special days

Huge gap, I know, but I have exciting news to share

Ross made the huge decision that serving a mission for the Church of Jesus Christ of Latter Day Saints is what he wants to do to show his gratitude to his Saviour. 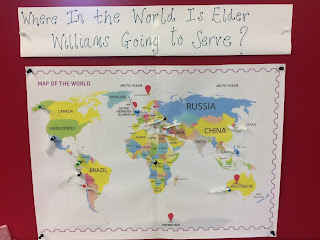 With Gareth shocking us all with California, Roseville Mission two years ago, we decided to have a board for guesses this time. 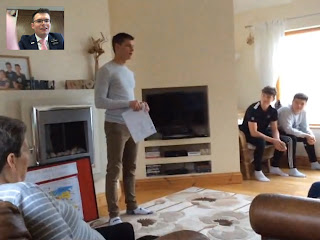 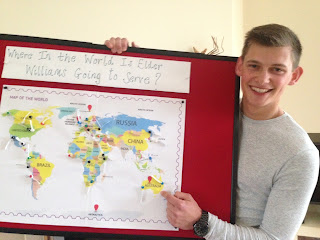 Ross' flying is really taking off now (pardon the pun)

Last week he flew to Gloucester and Cardiff with his instructor.

I am still blocking out the fact that my 17 year old son actually flies a plane, in the sky, and at times on his own!!!!!! 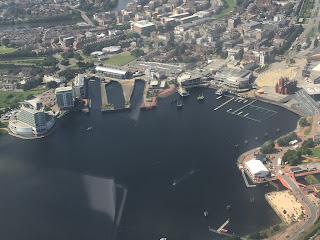 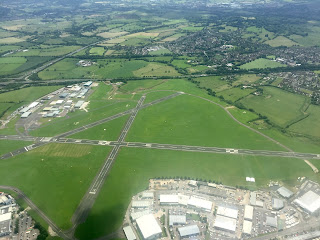 I will have to get used to it as he will soon qualify for his Private license and then he heads off to America to build some flying hours.

I wonder which license will be first, driving or flying?
Posted by Theresa at 13:08 3 comments: 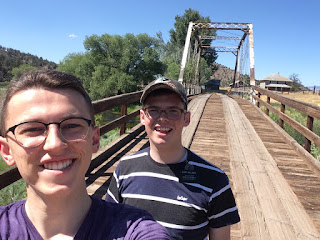 Transfer week again and Elder Tout moved on.  Elder England is Gareth's new companion and we look forward to hearing all about him.

One of the planned activities was the birthday party of a family from our Branch.  they combine their party when the weather is nice, great idea.  Martha and Grandma had the best time on the space hoppers and playing snakes and ladders and i think there was some kind of water fight!!! 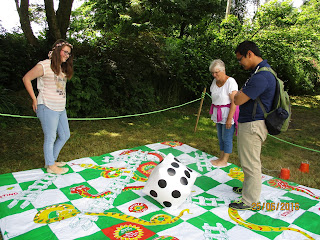 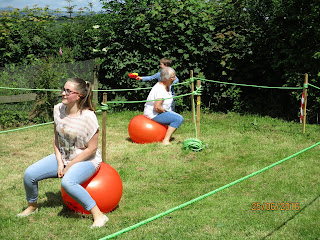 Thanks for a lovely party and happy memories made.

Theresa
I am wife to Calvin and Mum to Gareth, Ross and Martha. I work as a school admin officer. I enjoy crafting in my spare time.